…And an observation about fraud…in government: 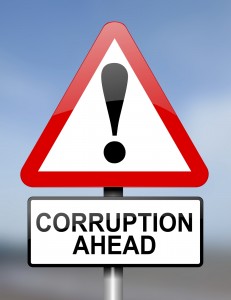 My contention has been that private industry is impacted by what I call “countervailing forces” which serve to eventually cap, contain, and even uncover frauds within companies, as the natural scheme of things in the marketplace ends up ferreting out the fraud and the perps who create, cause, and carry-out the misbehavior. If you cannot compete without doing false, wasteful, or illicit things, competition (or tips, or management review, etc.) will eventually “do you in.”

Said another way, perps within organizations who choose to lie, cheat, steal, obfuscate…or management teams who deliberately misstate results, and so on, ultimately get caught.  Quite frankly, because of these countervailing or internal forces, industry fraudsters who misuse business processes end up in the spotlight.  In the case of financial statement fraud by management, favorable reported results utilizing illicit techniques are simply not sustainable.

As but one example, repeated here: historically, CEO Michael Armstrong of AT&T remarked to an audience either at an analyst conference, or some similar presentation, that he simply could not believe or understand WorldCom’s (after its acquisition of MCI) substantial network-cost-as-a-percent-of-revenue advantage vs. all the other major telecom companies.  Mr. Armstrong was obviously correct, as that was exactly where the $11 billion financial reporting fraud resided.

Obviously, legislation promulgated by government, rules and regulations, SOX, financial reporting process requirements, and the like, and the threats of jail time, civil penalties, fines, and so on, likely assist in limiting incidents of fraud in industry as well.  Unfortunately and so far, however, those things have not been comprehensively applied to government.

Again, most important and impactful to naturally limiting fraud in industry, are: competition, business knowledge, inspection, and the nature of the marketplace.

My lawyer friend and associate gave me this observation about fraud in government:

Technology use is increasing within government, something that had long-ago occurred in industry.  The “natural” result of increased technology in the government sector…is…more information is available faster…and…all of that results in…more transparency.  As information and transparency increase in government, more wastefulness, inefficiency, and fraud/corruption get uncovered.  Inspection (media) and (hopefully) appropriate action should then logically deal with the here-to-for uncovered fraud.

That is, IF transparency does in fact follow increased technology utilization, public disclosure results, and unfettered action occurs.

I won’t go “political” here, but other things can get in the way.  I, for one, do want his assertions to be the case…it’s long overdue, and it’s very good for all of us taxpayer$!

If Facts Alone Don’t Convince You, Rely On…
Next Post: Pointing out the OBVIOUS