Testifying: Some Advice from my Counsel 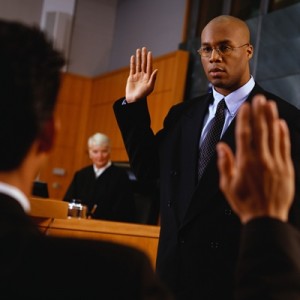 Actually, I knew a few of these already:

#1, “Tell the Truth.”  Now there’s a “mis-underestimated” statement if I ever heard one, and as my daughters would have told me, “well duh, Dad!”  Know this, however, perjury is a crime, and the “perp walk” is a good thing to avoid, but yes, this one is pretty elementary.

#2. “Wait until opposing counsel completes the full question, then take a breath, and answer ONLY the question asked.”  (If it’s a “bad” question, we can clarify it in cross-examination.)  Now, I’ll admit, this one got me kicked under the table a time or two.  Let’s face it, as a finance person, as management, your inclination is to explain things fully; you’re teaching at your company, in your organization.  One particular exception to this natural inclination to “teach,” however, is: just cognitively limit it during a deposition and on the stand.

#3. “Own the facts.”  I liked this one, it gave me strength.  My advantage in all of the frauds I have uncovered, I became the expert.  In such instances, “information (truly) is power,” and it became very important to me personally.  When opposing counsel put words in my mouth, or loaded up a compound question with multiple incorrect assumptions or premises, I had the full grasp of the facts, and I took advantage of it.  Get ready, be ready, stay ready.  I specifically recall one deposition question when I was asked to explain “signaling system seven.”  When I answered via a very succinct, yet comprehensive and understandable example (even for attorneys), they actually applauded.  Own the facts, and you own the process.  Don’t forget it.

#4.  “Nothing’s personal.”  If there was a rule that caused me the most trouble, this was it.  With all the maneuvering on the part of the defense team(s), quoting me incorrectly or incompletely, or whatever, their methods — just led me to the place of “they will try ANYTHING to diminish credibility, embarrass, attempt to mislead, all of it part of their inventory of purposeful trickery.”  They earned no respect using such techniques, and they certainly got none from me.  Yes, I got kicked under the table by my counsel (to calm down) multiple times.  That was the toughest one; I still get irritated thinking about those attempts.

In the end, all the bad guys were found guilty, or pleaded that way, and went to jail…