Competition Is A Very Good Thing (“a rant”) 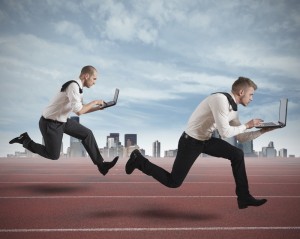 You’ve seen quotes (even) in this blog space on a host of basic lessons-learned. “The data tells you where to spend your time,” or “blocking and tackling,” “focus on the fundamentals,” and “inquisitiveness causes action” as just a few. We all have our own experiences to draw from, but can also cite examples of effective leadership techniques from a cast of characters we have personally seen in action, learned directly from, and heard about from credible sources—especially about how they performed in challenging times. In other words, we’ve seen them TESTED in ADVERSITY.

We also find useful benefits from research, education and bodies of knowledge, wherever we have reached-to and whatever sources we rely upon. On “the far (other) side” we see management fads with books, testing, advertising, seminars, so-called self-improvement “coaches”, and associated research annotated and quoted religiously (“strength-based leadership” and many, many others). As senior people, however, we’ve likely ferreted out the best of the theories, and installed what works for us, and more importantly, what does not.

“Bottom-line” or “at the end of the day,” (or any of the other trite, over-worked, “phrase-o-logically-tired and academically-inspired but most-of-the-time-untested, never-keeps-me-awake-at-night faddisms”), we end up relying upon those techniques which simply…WORK.

We all must develop defense mechanisms against:

The greatest and most effective force overcoming all of these things, however—which is embedded in capitalism and industry (but appears rarely in government, many universities, and “elitist” empire-building entities)—is the most powerful countervailing force on earth, the one which unfailingly perpetuates “creative destruction”:

Ultimately, competition causes best practices, it is one of the purest forms of “survival-of-the-fittest” corporate Darwinism. It forces out weak players, and ultimately rewards productivity, new ideas, technology, top talent…and there are multiple studies indicating that competition, coupled with ethical behavior and sound economic policy…is unbeatable; the “gold standard.”

Competition is a very good thing…so why not create it, encourage it, guide it?

For most of us, “at the end of the day,” we know it’s unbeatable…so join forces and embrace it.

Previous Post: « Management “Fads,” Jingles, and “How-To” Books and Messages
Next Post: The Sergeant Schultz Defense (“…I know nothing, nothing…”)