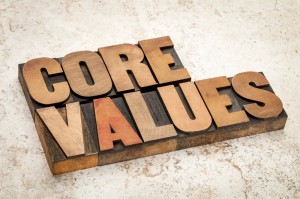 We all know Stephen Covey of “Seven Habits” content and fame. Covey’s original book, sequels, speeches, programs…even the copycats…all talk about developing and sustaining good “habits.” We can also recall other authors, speakers, speech-writers, and so on who extolled the benefits of consciously-chosen, repetitive behavior, all the way back to Aristotle, who indicated:

“We are what we repeatedly do. Excellence, then, is not an act, but a habit.” Aristotle likely also had it right when he indicated that we learn by imitation and practice: “We become just by doing just acts, temperate by doing temperate acts, brave by doing brave acts.”

Or more classically told as,

“We become just by the practice of just actions, self-controlled by exercising self-control, and courageous by performing acts of courage.”

Events and circumstances are encountered and dealt with one-by-one, experience-by-experience. These decision-points (hundreds of thousands over the course of a life), require a person to HAVE TO MAKE choices. Done appropriately, “choices-made-with-purpose…or consistency…or guided by something” then lead to habits, and habits become virtues, and virtues ultimately lead to and form character, and character is likely the STUFF of leadership.

Keeping on this “virtue” theme, Thomas aKempis (an Augustinian) wrote the following: “The time of adversity shows who is of most virtue. Occasions do not make a man frail, but they do show openly what he is.” Many other and blunter quotes directly address that same idea; for instance, you’ve likely heard… “that which does not kill you only makes you stronger” , or… “it’s not how high you soar when things are going great, it’s how high you bounce after you’ve hit bottom.” (that one’s attributed to General George Patton).

So, I suspect this “march to leadership”…is a long process, a marathon. As I look back on my short career thus far, I have to agree with some of those classic quotes, and as I look at my experiences, I have proven to myself that there are no “sound-bite” solutions to leadership. As a matter of fact, an idiom I’ve often heard is that, “one should be leery of sound-bite conclusions.”

Leadership, in my opinion, is done Bottoms-Up.

It is also the result of the combination of, or an accumulation of, and/or must depend upon:

So, from experience, leadership arises from a really long, drawn-out process, and it’s likely NEVER totally completed…that’s what I have been influenced to believe. From CORE, supplemented with education, applied to choices and decisions to be made (“experiences”) — subject to some developed decision-making process, then result in: habits, virtues, character, to…leadership.

Previous Post: « “What didn’t I ask that I should have?”
Next Post: Fraud is a business problem; nothing more, nothing less »