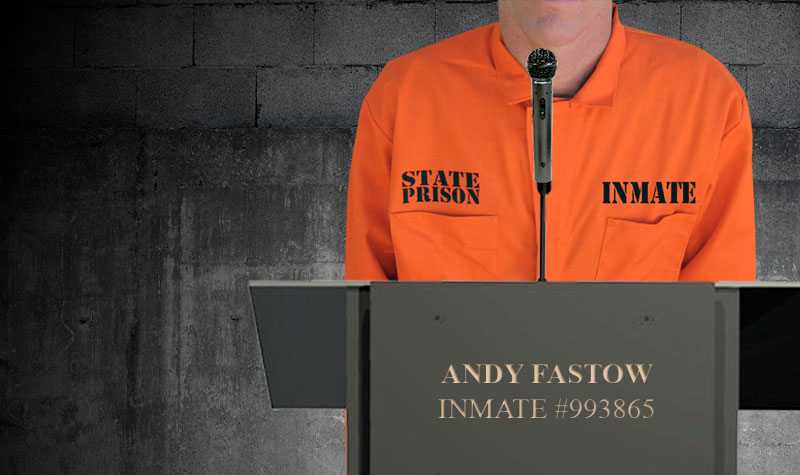 OK, my patience has run out. My last existing nerve I had on this particular topic just got numbed-out, not working, deadened…I’m (so) done with this.

The local chapter of a senior financial organization (the management roles targeted for membership in this organization include: CFO, VP-Finance, Controller, Treasurer, and equivalent). The group’s choice for this season’s kickoff speaker and the 2015-2016 program year was:

Most of us remember Hurricane Katrina (for a number of reasons, much less the idiocy and bias in the press). The two parts of that national disaster which still come to mind for me are:

Correspondingly, I feel that same way when I see such downright silly decisions made…like putting a criminal fraud felon on the podium and paying him to give a speech to a bunch of senior finance and accounting types. When I heard about this “choice,” I sent a two-line note to the local chapter’s admin email address which basically said (paraphrasing), I cannot think of a worse choice of a speaker; it’s just pitiful and naïve for you to do this.

I (obviously) did not attend.

But, after receiving and responding to defensive (and further) email correspondence from the local chapter—“spare me” on one, and a host of facts for the other…well…

I went one step further. I gave two of the group’s sponsors an idea on how to offset such a dumb choice of speaker. I recommended a former resident of the Hanoi Hilton who was with John McCain. This person is quoted often on many of the news networks, and he gives both inspirational, leadership, ethical, and…

Hell, if the group actually has him as a future speaker…I’ll both attend, and pay to do so.

“Wisdom is knowing the right path to take. Integrity is taking it.”  (M.H. McKee)

Why Tolerate Abusive Tactics and Contrarian Behaviors in the Workplace?
Next Post: Cultural Issues are Driven by Group Tyranny